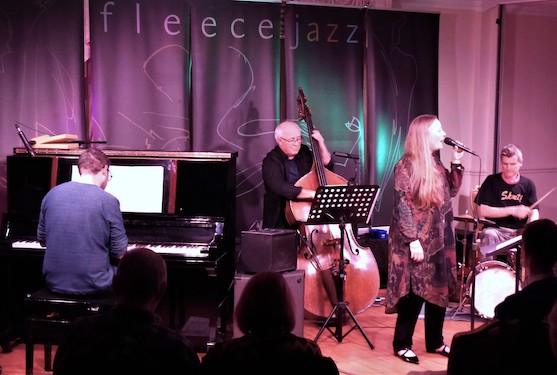 Brigitte Beraha is an explorer, an improviser, a singer who thinks deeply about the lyrics. She sang for us on Friday backed by a superb trio.

On stage were Brigitte Beraha on vocals, Barry Green on piano, bassist Chris Laurence and drummer and percussionist Paul Clarvis.

The programme was very well balanced, with songs by Brigitte and Barry, some standards, and a few surprises. Aaron Copland’s composition of Emily Dickenson’s poem “Heart, We Will Forget Him” was turned into a lovely, sad jazz ballad, which somehow segued naturally into “I’m Always Chasing Rainbows” (Harry Carroll composer, Joseph McCarthy lyricist).

But a bigger surprise was a song that Brigitte considers the most beautiful one ever written. It was written in the late 1600s by Henry Purcell. It is “Dido’s Lament” from Purcell’s “Dido and Aeneas”. The band began and ended with a close and beautifully played and sung rendition of the Purcell, but the central part of the song was filled with quite amazing cross improvisations by the whole band.

Brigitte sang the verse as well as the chorises of Victor Schertzinger and Johnny Mercer’s “I Remember You”. I love singers that sing the verse. Brigitte scats a lot, but varies the articulations to suit the songs, as in this one.

I love what they did with Jobim’s “Wave”. Paul plays the most expressive tambourine. Barry had a stunning solo. Paul and Brigitte had a fascinating duet. Chris’ solo was superb.

It was a very good night,