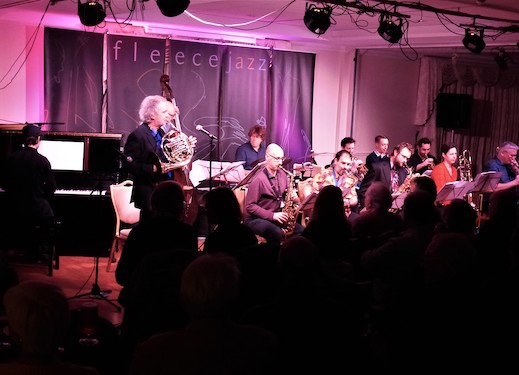 Jim Rattigan‘s band gave us a heap of joy last Friday. All of the tunes were written and arranged by Jim. The tunes were excellent, and the arrangements special. There were 13 tunes in the two sets, and Jim made use of a lot more than 13 combinations of instruments as well as tempo changes in this well balanced programme. It was a great gig from beginning to the encore, with some avery special moments.

As well as a stunning Andy Panayi solo on “Strong Tea”, there was a ‘Yeh Jess * ” moment. When odd things happen you get magic. Someone missed their solo, so Hans jumped in with a lovely one. Hans’s solo on “Ballad Blue” was just beautiful. Jim had a stunning solo on that one.

Martin’s accompaniment was not a moment. It was just special throughout the gig.

I loved the “battles” between groups of similar instruments:the saxes almost doing cutting, and the trumpets firing off each other, in 4s and 8s.

This was the last gig of the band’s tour, so I am sorry you will not get to hear Jim’s stories. In particular, why the first tune was called “Timbuck3”.

* In the Benny Goodman 1938 Carnegie Hall gig, there was a magic moment, when in “Sing, Sing, Sing”, Jess Stacey jumped in with an unplanned solo, one of the greatest piano solos ever. Benny was heard to mildly admonish Jess, clearly heard to say “Yeh, Jess”.