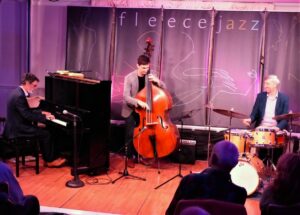 Sound check? Rehearsals? Detailed gig planning? With guys this good whose listening is phenomenal, none of this is necessary. A little discussion on the patio and hey were of one mind.

We had Steve Brown on drums, Adam King on bass and the masterful David Newton on piano.

It is hard to describe how good this gig was.

We had not seen Adam King in some time, and never in a trio, where all three are so exposed. His use of the whole instrument at speed with perfect intonation was wonderful. Steve Brown was usually with us accompanying  a singer. Last night he showed us the full range of his skills. And then there was the pianist.

Many pianists, even great ones, often use the left hand for rhythm and chords. Not David Newton, whose left hand is just as powerful and inventive as the right. Ideas flowed. Tempi switched. Always the right number of notes (as Stan Tracey once said).

The evening started with Hayman and Green’s Out of Nowhere, with the Goldfinger theme used throughout the song. Adam had a solo at speed across the whole fingerboard, amazing to watch. Steve cat the vibe in an instant, and grinned from ear to ear listening to David solo.  The Burwell ballad “Sweet Lorraine” Was lovely. My favourite ballad was “Estate”, Italian for summer. Bruno Martino wrote a song about a hatred of summer because of a lost lover; from the translated lyric, “the snow covers everything and there is peace”. The English lyrics are quite upbeat. David seemed to have the Itallian feel. The song was deeply emotional.

That was the other things about the gig. The solos from all three were melodic. They were having such a good time so we did too. To have our music back was great. To have it back with this trio was amazing.

I should have written this two weeks ago. Stunning gig.

What a wonderful way to start off Fleece Jazz after a year and a half of no live jazz. And independently of that, this gig was a cracker!

I was so enthralled that I forgot I was supposed to take notes. I can say that Cannonball would have been very pleased. What they did was paint a picture of the depth of the man as well as the music he played and wrote. And of course, the musicianship was superb.

One way of judging a band is to see if they listen to each other. Last night the listening was palpable. It was the first gig in quite a while for them too, though you would never know it. The first set was really great. The second set was special: more free, more fun.

In the narrative, Tony paid tribute to Michael Burgess, who died last year. It was very nice of him to do so. They had known each other for 20 years.

And after a wonderful evening last night, we look forward to the apotheosis of the piano trio, with David Newton backed by Steve Brown on drums and Adam King on Bass

Alan Barnes is a prolific international performer, composer, arranger, bandleader and touring soloist.  He is best known for his work on clarinet, alto and baritone sax, where he combines a formidable virtuosity with a musical expression and collaborative spirit that have few peers. As a raconteur he has no jazz peer.

His range and brilliance have made him a “first call” for studio and live work since his precocious arrival on the scene more than thirty years ago.

We will be treated to a Christmas reprise of his brilliant Ellington/Strayhorn album.

We are delighted to have three of our favourite musicians with us. Art Themen’s Wikipedia page chronicles his illustrious jazz career. We love his tone, musicality and joy in playing.

Pete Whittaker is organist for the best. The Hammond B3 beast he brings is in itself a marvel.

“…Bzhezhinska shares with Alice (Coltrane) a mastery of the jazz harp.” ★★★★★, The Times

Alina Bzhezhinska is one of the most exciting and dynamic harpists based in the UK. Her imaginative programmes have established her reputation as a harpist of exceptional accomplishment. She has had the honour of playing at European Parliament, at the Queen’s 80th-birthday celebrations at Balmoral Castle and at the King of Thailand’s birthday celebrations in Bangkok.

Jay, Mikele, Adam and Joel are outstanding players in their own right.

This high energy sextet, with African and Jazz influences, was formed in late 2016, to perform the music of two titans of Jazz – Bheki Mseleku and McCoy Tyner.  It was an ambition born of love and experience; Simon Thorpe (the original bassist) and John toured with Bheki while Jason worked with McCoy.  These associations bring an authority and authenticity to the group’s music as well as having a strong influence on their original material.

Since the bands inception it has released its critically acclaimed debut album McCoy and Mseleku and has played to enthusiastic audiences at club and festival appearances including  Love Supreme, Scarborough, and Herts festivals as well as concert recordings for BBC Radio 3’s Jazz Now and in session for Radio 3’s J-Z.

In his 42 years in the business of jazz, Clark Tracey has shown excellence and garnered awards in many guises: drummer, composer, leader, teacher for a start. He fosters great young talent in his groups. For us he is leading a stunning sextet, with himself as leader and drummer who brings great music and joy whenever he visits us.

Mark Armstrong is a trumpeter, composer and educator. He is artistic director of the National Youth Jazz Orchestra. Tom Ridout is a young reed player of whom Selwyn Harris of Jazzwise has said, “fiery, focussed soloing by impressive tenor saxophonist”.

Daniel Higham is the lead trombonist for the National Youth Jazz Orchestra, and has his own quartet. On piano will be Will Barry, who graduated from the Royal Academy of Music in 2016. He is part of numerous projects internationally, most prominently touring with Phronesis bassist Jasper Høiby. In 2015, electric bassist James Owston took up the double bass and joined the jazz course at the Royal Birmingham Conservatoire. He is currently in his fourth and final year, studying with Arnie Somogyi and Mark Hodgson.