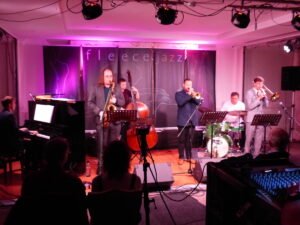 One of the odd things about jazz is that often, the more deps the better. Quentin Collins (trumpet and flugelhorn) was hired for the band in time for his name to be published. Trombonist James Wade Sired  and pianist Matt Carter were the reps on the night. Tom Ridout on alto and tenor saxes and recorder, James Owston on bass and of course, Clark Tracey on drums were on the original list. So you might expect their rehearsal and soundcheck to be interesting.

It was: interesting and fun, and intense and jolly. And it led to a really great gig.

Clark has got to be one of our very top drummers (as well his great arranging and composing). His soloing is beautiful, often melodic, always fresh and varied. He is a superb accompanist, which was his primary role for this band. There was one spectacular solo in the last number, Blakey’s “New World”. Much of the music was from the standard repertoire. There were a couple of Clark’s. He apologised for the pun in his “Mark Nightingale Sings”. We had a section from Stan Tracey’s “Devil’s Acre”.

Tpm Ridout supplied us with a starry production of his “Vega”, There was something very special in the first set when the and played a Welsh “Lament”, with Tom on recorder. The rhythms were complex, the band weaving through the central recorder voice. It was just so beautiful.

The first sound we heard was the horn chorus from Quentin, Tom and James D.R, on the up-beat “One by One” by Wayne Shorter. I am sure of the title and composer because Clark is one of the few leaders that tells his audience what and who by. Thank you.

So for the rest of the evening, we were spellbound by what we heard. The tone and improvisational complexity of Quentin’s playing, whether on trumpet or flugel, James Darcy Sired’s  fine trombone playing, and James Owston’s speed, musicality and movement on bass. As an improvising accompanist and as a soloist, Matt Carter was excellent.

As the happy audience went home, I noted that Clark will be back with us for our Christmas gig. Hoorah, and hoorah again if any of these musicians were to grace our stage again.