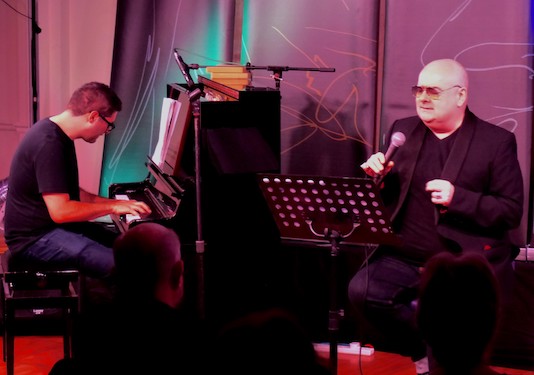 After Friday’s gig, I was wondering about why I loved the gig so much, just one voice and pianist, But what a voice, what a pianist!

Ian Shaw‘s basic instrument is excellent. It is what he does with it that is so amazing. He has complete control of timbre, intonation, enunciation, dynamics, phrasing, and probably a bunch more components of voice that I don’t know about. More important is how he uses that control. He is an improvising singer, and his flights of improvisation make the words have more meaning.

Barry Green says he is working on “the right number of notes” (as Stan Tracey said), Without a pile of virtuosity, which I know he has, the phrasing and dynamics need to be perfect in the moment as he hears Ian sing, and they are. He gave us many thoughtful solos.

That’s right, Ian, don’t tell the sound guy about a special guest. Hannah Horton played sax on the seventh tune of the first set, and again in the second set, and her tenor sounded just fine unamplified.

Ian had constructed a delightfully varied and meaningful programme, and his presentation of the music was often great fun, and always interesting. I loved it when he sang so beautifully the rarely heard verse of Richard Rogers’ “With a Song in My Heart”. “September in the Rain” (Harry Warren composer, Al Dubin lyricist) gave us a chance to hear some wonderful extended scatting in this up tempo version of the song.

Barry’s accompaniment on Jimmy Webb’s “Wichita Lineman” was sparse, with lovely phrasing, each note placed just right. His solo on Jack Segal’s “I Keep Going Back to Joe’s”, one of my favourite songs, was wonderful.

Leonard Cohen started as a poet, and wrote some novels, so it is not a surprise that he was a consummate lyricist. “Dance Me to the End of Love” was extra special, in a very special evening. Ian gave the words such meaning, through the whole range of his voice. Barry’s accompaniment and solo were sublime.