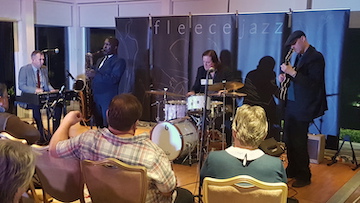 I finally got to watch, rig and run a gig! Any gig would have been great, but this one was special. Tony Kofi brought his Organization to play music mostly from his highly regarded album “Point Blank”. We had Tony on baritone saxophone, Pete Whittaker on the organ, Simon Fersby on guitar and Peter Cater on drums.

As Tony tells it, he went to a rehearsal with the group with an old tenor sax, which disintegrated during the session. But Tony had a bari in his boot, and the group loved the sound. We could hear why. The timbre range of the instrument is amazing: growl, power, clarity, ballad softness, not to mention the pitch range from bass to altisimo, all available under Tony’s fingers.

Many of the tunes required the power of the sax, but the clarity and sweetness of Tony’s solo in Bencriscutto’s “Summer in Central Park” was lovely. Great solo on this 3/4 tune.

Pete W. didn’t bring his Leslie speakers, but it mattered not. We got the full sound and soundscape as if the rotating speakers were physically there. His is one of the very top organists. I love his bass lines. He says they are pretty ordinary. I respectfully disagree. We got the full range of the instrument and Pete’s imagination in Tyner’s “Search for Peace”.

Simon is an excellent guitarist, whether playing in accompaniment or soloing. His careful use of stomp boxes gave us timbre changes as needed. He had lots of fine solos: Martin’s “Cisco” with a bit of fuzz, dirt in Monk’s “L.S. Blues” and pure tone on Mancini’s “Theme from Mr. Lucky”.

Peter C. had beautifully solid grooves under the heads and solos and a couple of excellent solos himself. I particularly liked his solo on “Cisco”. He is a very listening drummer. When Tony went through a series of quotes in a solo on Smith’s “Ready and Able” and hit a real stinker, Peter’s bass drum rang out with a “boom-BOOM” without breaking the groove.
These guys have the blues embedded in all their playing. No surprise, then, that the highlight of the evening for me was “L.S. Blues”. It got to the heart. When it was finished, there was that lovely little delay before the audience applauded and whooped.

Next week, a guitar led gig, the hugely talented Nigel Price brings Jim Watson on organ, Vasilis Xenopoulos on tenor and Pete Levett on drums. It will be a good one, folks. Do come.