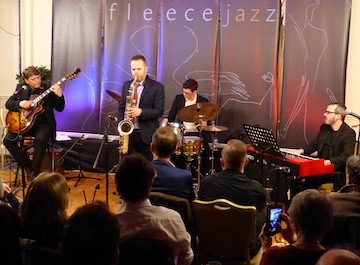 Another stonking gig, but here’s the thing. Last week and this week we had almost identical instrumentation (baritone sax last week, tenor this), but they were two very different gigs. Nigel Price led on guitar, Vasilis Xenopoulis on tenor, Jim Watson on organ and Joel Barford drums. Even when they played the same tune (Montgomery’s “Full House”) the approach was very different.

Nigel put us in the mood instantly with an upbeat “Indian Summer” (Victor Herbert). We got three fine solos from guitar, horn and organ, and a sparkling set of 4s with the drums. Nigel’s solo on Jones’ “Bitter Sweet” was wonderful. Lots of smiles from the players as they accompanied solos. In fact the listening factor was huge all through the gig. Nigel also had some lovely a cappella intros: intricate, flowing, always building to the tune. Van Heusen’s “Darn That Dream”, was a good example: Nigel threw in a few chords on harmonics as accents.

Vasilis is a tenor star. He had lovely unison work on heads, and ace solos all the way through the gig (well, they all did). I think Vasilis’s solo on Blossom Dearie’s “Sweet Georgie Fame” did stand out.

I had forgotten how good Jim’s organ playing was. He gave us interesting bass lines throughout. Like his colleagues, his accompaniment was meticulous, anticipating almost what the soloist would do. His solo on “Bitter Sweet” was superb.

I think Nigel was showcasing the young Joel Barford, and so he should. What a stunning drummer! He had superb solos, 4s that made people smile, and listening accompaniment. To end the gig, Nigel constructed an amalgam of “Straight No Chaser” and “Billy’s Bounce” (Monk and Parker). Everybody blew their butts off, but Joel was given the central position and was amazing.

The tune that got to me, and I will remember was one of Nigel’s. “Smokescape” was strong and ethereal at the same time. Lovely.