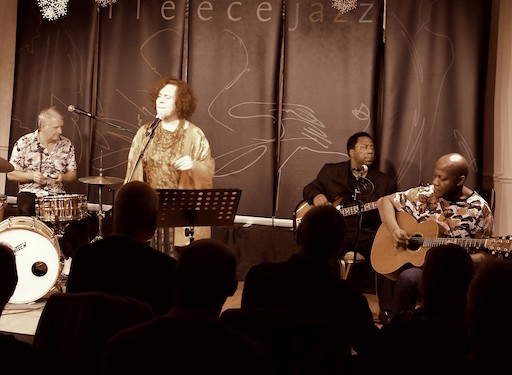 I have written before about leaders who have a close connection to the audience. Sarah Jane Morris Is the best example of this art. Whether speaking about the music or the musicians, or singing in her inimitable style, she draws the audience to her, includes them in. This, plus world class musicianship from all four, made for a great gig.

Sarah Jane Morris was the arranger with Tony Remy on many of the songs, guitarist Tony Remy was superb, as was bassist Henry Thomas and drummer Martyn Barker. All three instrumentalists were backing singers as well.

The programme started with two songs from Sarah Jane’s repertoire. Most of the rest of the gig was dedicated to the songs of John Martyn. She ended with three more from her own repertoire.

It fascinated me that two of the songs were new to Henry and Martyn, but they picked up the key, the chords and the vibe after listening for a chorus. The listening was visible and palpable throughout.

Favourites? Maybe John Martyn’s “Solid Air”, which opened the second set. The encore was John Martyn’s “I Don’t Wanna Know About Evil”, in which Tony and Henry had superb solos, and we all joined in.

Most leaders introduce the band again at the end of the gig. Sarah Jane gave us fascinating stories about each of them. Her stories throughout the gig about John Martyn were very interesting. They added a lot to this wonderful gig.

Next week, Friday the 13, don’t be scared. You will be in the safe hands of one of the finest pianists about anywhere. The Dave Newton Trio includes Simon Thorpe on bass and Winston Clifford on drums.