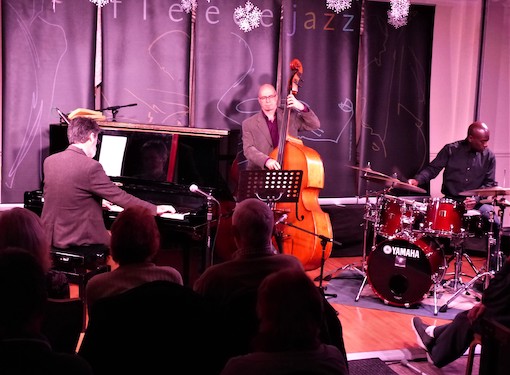 I just received the photos of the David Newton Trio gig, with Peter the photographer’s comments: “Brilliant gig on Friday night. ‘The One and Only’ it truly proved to be. Three Guys at the top of their game Dave/Simon/Winston (D.S.W trio)
From the very first note to the last, Superb !! Clean,clear and swing.”. No argument there, then. I love the piano trio form, and this one was world class.

Dave Brubeck’s “In Your Own Sweet Way” opened the gig. If anyone felt like the piano trio form was boring they would have been put to shame by their interpretation, musicianship, tightness as a group and sheer exuberance. That was followed by Gene de Paul’s beautiful “I Remember April”, in which all three guys had exquisite solos.

Something about David and improvisation: you sometimes see a keyboardist drop his left had as the right works out an idea. I saw David develop a string of ideas with the left hand. His hands are truly equal partners, which is not that common. He also uses the soft pedal to modify the instrument’s tonality. There is only one other jazz musician that I remember doing that. This man’s range in speed, power, delicacy was amazing. We heard all of these in the Chopin Prelude in C minor,

Simon had lovely solos and intros throughout. I particularly remember his solo on “I Remember April”. His accompaniment was consistently brilliant. His grin at the work of the other two was infectious.

I was hoping that Winston would sing, and was not disappointed. In the first set, Guy Woods’ “My One and Only Love” showed us Winston’s deep tenor to counter-tenor range, beautiful phrasing and flow of ideas. In the second set, he had great fun with “Bye Bye Black Bird” (Ray Henderson). His scatting was delightful. Oh yes, he is also and mostly a world class drummer.

It was a gig I will long remember. But…