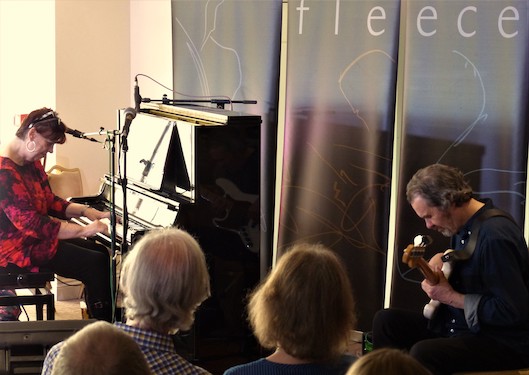 Liane Carroll has been a great friend to the club, but to come to us to do a benefit is extra special. And what a gig! She is truly a remarkable performer and person. She has a great warm voice, a superb sense of phrasing, and more important even than those is her love of the words. Now, couple that with her great piano playing…

In the second set, we had her husband, Roger Carey, playing bass guitar. Roger works in many genres. His jazz playing is excellent and passionate.

What to say about the gig? Just saying that Liane sang for us should tell you what a gig it was. The programme was a mix of well known and a few not so well known, with a good balance of tempo and mood. There were a few that really affected me.

W.C. Handy’s “St. Lous Blues”, in the first set had Liane playing at least 5 grooves. This was followed by two songs which she associated with her mother, Artie Butler and Phyllis Molinary wrote the music and lyrics to “Here’s To Life”, and Hoagy Carmichael wrote “I Get Along Without You Very Well”. Liane sang this with an immense depth of passion without a hint of soppiness.

In “Autumn Leaves”, (music by Joseph Kosman, English lyrics by Johnny Mercer), Liane had an amazing counterpoint section with the bass line, improvisation and voice.

In the Loewe/Lerner “Almost Like Being In Hove” (pardon me, “Love” — you never know what the woman is going to say), Roger had a fine solo. His accompaniment throughout the set was top class.

Liane sang and played 23 songs. Each one deserves a comment. If you were there, you knew it. If you were watching the football, you would just be jealous.

No gig next week folks we are on our summer schedule. but on 24 May, the man who is considered by many to be he heir to Grappelli will be with us: Tim Kliphuis Violin with Nigel Clark Guitar and Ray Percy Bass. See the great man in the intimate setting of Fleece Jazz.