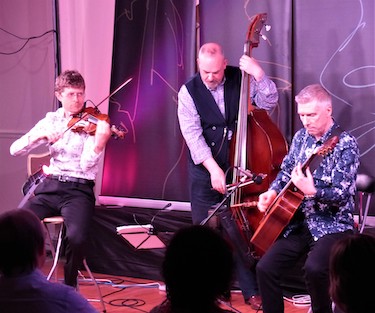 Canadians like me have a difficulty with British understatement. To say that the Tim Kliphius Trio was a bit special, even in the context of the musicianship the club gets, is the best I can do. The music was varied and fascinating, the musicianship exceptional. If they have fun, we have fun. And they did.

The evening started off with John Lewis’s “Django”. I first heard the Modern Jazz Quartet in my teens, and they turned me onto jazz. I was an only Bach guy before then. You could hear both MJQ and Django Reinhardt clearly in the music, particularly in Nigel’s solo.

The fourth tune was the presto movement, Concerto #4 of Bach’s six Brandenburg Concerti. It was a trio reduction from the work they did with the Netherlands Chamber Orchestra. It was true to Bach and to jazz, really wonderful. Of course it helps that Bach swings.

In this and the other classical pieces we heard, people said that they sounded like a full orchestra. Tim was double and even triple and quadruple stopping. Yes, it is possible if you are fast enough to do it sequentially. He was also playing harmonics in, it seemed, all of the positions of the violin as if they were not in any way exceptional or difficult, but just a high note. Whole phrases in harmonics! Nigel was adding percussion to the guitar, and Roy to the bass. Marvelous. The arrangement took us through lots of styles, including, (I think), Irish folk.

We also had Vivaldi’s “Winter” from his “Four Seasons”, all three musicians adding percussion; a Gabriel Fauré Nocturne, more Bach, “Brandenburg #3, Allegro”, Paganini’s “Caprice #24”. The latter is probably best known for the Lloyd Webber arrangement for the South Bank Show.

The trio had great fun with Stephane Grappelli’s “Piccadilly Stomp”, a fast Hot Club number. What was particularly noticeable was the quality of the accompaniment from all three, but in this number, particularly from Nigel. You could feel them listening.

If you missed this gig, it is the first of a UK tour. Find them and go.

A break for a couple of weeks will heighten the anticipation of the stunning harpist Alina Bzhezhinska, playing, among lots of other things, the music of Alice Coltrane. What a band! Alina on harp, Tony Kofi on sax, Larry Bartley on bass and drummer Joel Prime. Make sure that 14 June is in your diary.