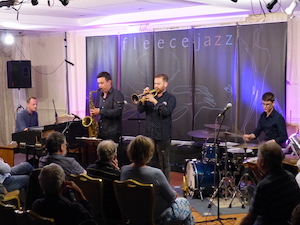 Last night saw the return of several Fleece Jazz familiars with acclaimed organ driven quartet ‘QCBA.’ Headed up by the frontline heavyweight duo of Quentin Collins (tr) and Brandon Allen (ts), this aptly titled ensemble exhibits a roster of original compositions infused by the unmistakable colour of the Blue Note catalogue from the 1950’s and 60’’s; a stalwart of the hard-bop golden era. It is primarily through QCBA’s dedication to original compositions that this group surpasses the pitfalls of pastiche, which when coupled with outstanding levels of musicianship ensured an evening of engaging and highly enjoyable improvised sound.

In addition this line-up featured the widely appreciated and remarkably in-demand character of Ross Stanley at the Hammond organ, supported by the fresh presence of QCBA’s newest recruit, drummer Lloyd Haines. It is between unrelenting moments of musical brilliance [articulated well in the old axiom ‘man, this guy can really cook’] that one begins to notice the extraordinary lengths to which Stanley dedicates himself to this craft. Be it simply [what would seem to most] the logistical nightmare of transporting a fully-functioning Hammond organ and accompanying Leslie cabinet across the country on a nightly basis, to the unfaltering positivity that his character brings to the music: it is no surprise that everybody loves making music with this guy.

Lighting up a fire under the whole ensemble and filling the shoes of Enzo Zirilli, Lloyd Haines represents the newest generation of improvising musician; notably younger than QCBA’s more seasoned constituents, Haines brings to the music an intensity and firmly-planted sophistication far beyond that which his years might suggest. His solo on Collins’ composition ‘Feurteventura’ held
the room captivated as he assembled brushed rhythmic structures into a narrative whose pinnacle coincided with a cymbal flying magnificently from its stand in what was an unforeseen but wholly musical punctuation to his larger musical statement.

QCBA’s promise to deliver one of the ‘hardest hitting frontlines’ in the business was not overstated; from the countless cutting heads and tightly woven melodic motifs to their exceedingly inventive and dexterous improvisations, Collins and Allen demonstrated a virtuosity and fluency in their dialogue that stood testament to their years of experience on the scene. Allen’s composition ‘Modal Transition’ provided a canvas reminiscent of Joe Henderson’s mid-60’s aesthetic that when contrasted with a more intimate composition found in ‘Oscar’s Lullaby’ shows this group’s rangeand versatility as they approach a well-trodden musical palette with fresh intention and vigour.

QCBA’s latest release “Beauty In Quiet Places” is out now on the Unbuntu Music label.

Needless to say it is the continued support from you, our patrons at Fleece Jazz that makes unmissable evenings like this possible on a weekly basis. Please continue to support your local community of live Jazz music here at the Fleece. We look forward to welcoming world-renowned drummer Asaf Sirkis and critically-acclaimed vocalist Sylwia Bialas on June 8th as they present original compositions that celebrate music from a wide range of genre with their ‘International Quartet

From Dave:
Sorry, pictures, later: Peter Fairman is on holiday.
Next week, the Sirkis/Bialas International Quartet, of whom the Los Angeles Reviews said “Bialas’s voice is not only exceptional, both in timbre and range, but her improvisations are stunning. She uses her voice like an instrument, wordless, powerful, soaring…”. Asaf Sirkis ~ Drums/Compositions/Konnakol, Sylwia Bialas ~ Vocals/Compositions, Frank Harrison Piano/Keys, Kevin Glasgow ~ Electric Bass