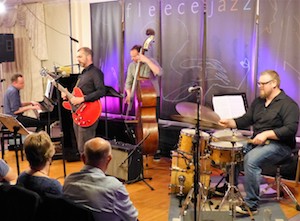 I often find that the guitar/piano combination is a little muddy, as they both live in the same sonic area. On Friday we had two stunning players, no mud in sight: each instrument rang out clearly.

Chris Allard‘s Band was Chris on guitar, Ross Stanley on piano, Oli Hayhurst on bass and Nick Smalley on drums. They played some of Chris’s tunes, a few standards, each sufficiently extended to allow lots of blowing time. We were treated to some great solos from all four of them.

Ross first, because he epitomized the magic that non-musicians like me can never figure out. Ross arrived late due to a lunchtime gig far away. He missed the sound check and any rehearsal. He saw some of Chris’s detailed charts about a half an hour before the gig. Don’t tell anybody. You couldn’t notice. The man played as if the music was totally familiar, without losing the freshness. You see? Magic.

Chris brought one small stomp set which he used with considerable delicacy. Chris has technique to die for, plectrum, classical and combined. The solos that stuck in my memory were in his “Morphic Resonance” and in his ode to his as yet unborn child, “Critter”, the opening number of the gig. Ross’s accompaniment for “Critter”, was also memorable.

Oli and Nick used the blowing toom to great effect as well, but it was their listening and accompaniment which I enjoyed most.

Next Friday, the music of Cedar Walton and Duke Pearson, with a superb quintet led by the Fishwick brothers. We will have Steve Fishwick on trumpet, Matt Fishwick on drums, Dave O’Higgins on sax, Rob Barron on piano and Dario De Leche on bass. This band deserves a big audience, and by the way, so do we.