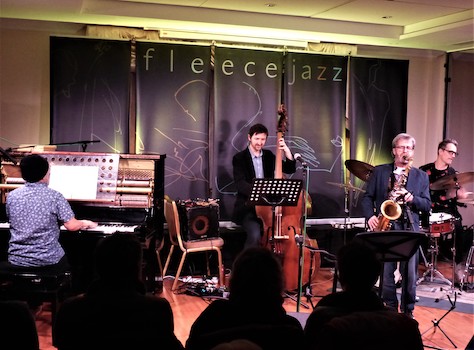 Again, I wasn’t there. I came to rig, and was there for the sound check/rehearsal, but had to leave before the show. All reports on the gig say it was terrific. I am very sorry I missed it.

I did get a taste in the sound check In fact the sound check is a good indicator to the enjoyability of the gig itself. First Jonathan Gee sits down at the piano and puts it through its paces. The man is full of style and flair. There was some new music for which he wanted to get the head rhythms just right. Tom Hooper, having set up his drums, had a tune, and a wallop, bloody good. Tim Whitehead has been practicing in the band room, comes in and starts a rehearsal of some of the tough stuff to play. Even in rehearsal mode, the guy is terrific, and the music is superb. Andy Hamill having had his bass and amp set up, joins in. Gerry had the sound really good by this time, It all sounds great.

Next week, the amazing guitar duo of Pete Oxley and Nicolas Meier, ably supported by Raph Mizraki on bass and Paul Cavaciuti on drums. The technique and musical intelligence of all four is world class. Be prepared for woderful music and a large sense of joy and fun.
Please note that there is no gig on the 13th of March