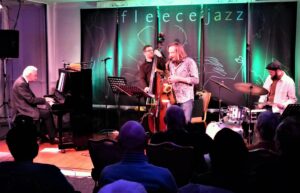 This band was a delight from first note to last. We had a programme of film related music: some from the movies, and some by our leader, Bassist George Trebar  It was so nice to have people who had not played for us before: George, Pete Hill on drums and pianist Roy Hilton. Altoist Matt Wates is  often with us and so welcome.

I will append the set list from Steve Jordan. It is difficult to pick out highlights as all the solos hit the spot. The first two tunes set the tone for us, by which time the band was at home with the space and the audience. Some were surprised at the fact we have a listening audience, and found that great to play to.

The theme from the file “Taxi Driver” had solos from Matt and George that told the story beautifully. Similarly on “Laura”, Georges bass solo, with strong use of vibrato caught the mysterious edgy story that the lyrics tell. I love instrumentalists who tell stories.Matt always seems to tell a story with his solos.

“Night Owls” was one of Georges tunes. Both Roy and Pete had excellent solos on this one.

I hope we see this group again soon. They were having a great time, so so did we.

Performed by Miles Davis and Bill Evans amongst others. From film of the same name from1947

From film, The Uninvited. Has been performed by Miles Davis, Ella Fitzgerald and Frank Sinatra amongst others.

Inspired by a character from Kerouac’s ‘On The Road’ about the Beat Generation.