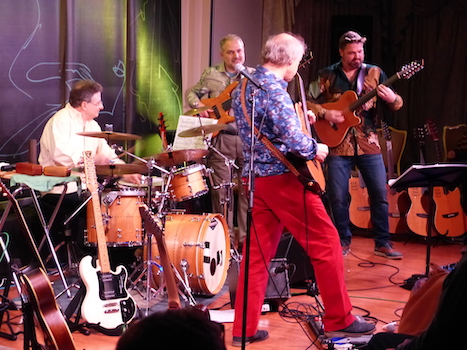 Wonderful, varied music, musicianship from all four musicians to die for. This evening full of fun and joy was brought to us by Nicolas Meier & Pete Oxley on lots of guitars, Raph Mizraki on basses and hand drum, and Paul Cavaciuti on drums and music stand. After the gig, you could see the audience float home, and the smiles on the faces of the musicians.

The surprise was “Alors Hampstead”. It started with an extended duo, Paul and Raph. Raph is an amazing hand drummer. When the rest of the band came in, Raph played a fretted electric bass, Pete played the 12 string, and Nic played an unfretted 6 string. I am going to stop with the instruments..

Most of the songs were by Peter or Nicolas. Pete’s beautiful ballad, “The Gift”, with a solo by Pete which I loved, was one example of many. Nicolas’s “Frantics”, which ended the programme, was another. It was funky rock, and popped between 4/4 and 5/4. Very exciting stuff.

They made amends in the encore, with a bit of “proper jazz”: Nicolas’s “Lauder Lebsing” (I think I got the name wrong). Everybody had remarkable solos on this one. They had good fun with quotes. Raph was on the standup bass, and introduced some slap. It was a perfect way to end a wonderful gig.

No gig next week, but to follow last Friday, the next gig, Friday 20 March, had better be something special.
Filling that bill of excellence and fun will be my favourite trumpeter, Bryan Corbett. On Friday, 20 March he brings his “Hi-Fly Quintet ’59”, The music will be that of the greats of that year: Davis, Mingus, Brubeck, Coleman, Silver and many others. The first class band will be Bryan Corbett on trumpet and flugel, Chris Bowden on alto sax, Matt Ratcliffe on piano, Tom Hill on bass and Carl Hemmingsley on drums. The gig promises to supply familiar music beautifully played.