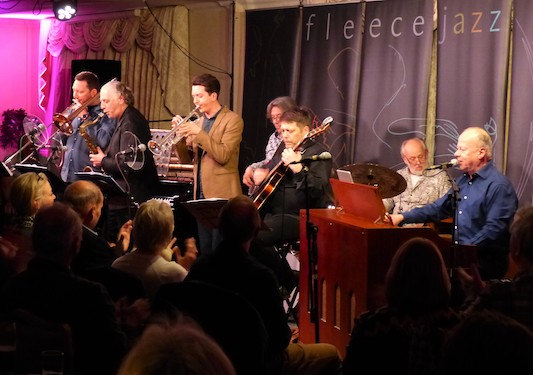 We don’t often get a septet at Fleece Jazz, and to get one as marvelous as this is exceptional.

We had: John East‘s excellent vocals and (real vintage) Hammond and Leslie, Mark Fletcher magnificent on drums, Freddie Gavita depping beautifully on trumpet and flugel, Nigel Price majestic on guitar, the great electric bassist Steve Pearce, Dave Lewis a star as always on tenor sax and Dan Hewson doubling on trombone and piano (not at the same time, but I bet he could). What a lineup indeed!

And they didn’t disappoint. From opening song to encore they sent energy, accuracy, artistry and fun out to the audience. Going through each of their solos would be silly: all fine.

I do want to concentrate on one player. Mark was hidden most of the time in the back row of a crowded stage. I spent some time listening to his accompaniment. He seemed to be right in the mind of the players, supporting soloists and at the same time hearing the rest of the accompanying players. Accompanying is an art, and Mark was spot on whether it be a quiet vocal ballad, a mid-pace blues or a full on up tempo song.

We had that kind of variety in the programme, which made the gig move just fly by, with an audience wanting much more.

I should mention the arrangements. It was clear in a short rehearsal that this was not trivial stuff. The audience would only know that Freddy was a dep because John told them.

We had a glorious evening.

Next week we have the Sean Khan Quartet. Sean’s blissful and gifted alto sax playing demonstrates a rare technical prowess, an understanding of Jazz history and a raging determination to carve out its future.

We have Sean Kahn on alto & soprano sax, Sam Leake on piano, Lorenzo Bassignani on bass and Laurie Lowe on drums.

Sean’s second album was described simply by Jazzwise as stunning, the acclaim and success of this album led to Sean and his band playing to sell out crowds at Ronnie Scott’s and The Jazz Cafe. I hope to see you at what promises to be an excellent gig.