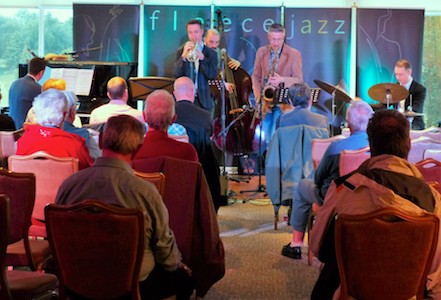 If Duke Pearson and Cedar Walton were at Fleece Jazz last Friday, they would have left very pleased. The Fishwick brothers’ quintet brought them to us beautifully. The band was Steve Fishwick on trumpet, Matt Fishwick on drums, Dave O’Higgins on tenor sax, Rob Barron on piano and Luca de Lecce on bass.

Steve promised a programme of two halves, the music of Duke Pearson in the first set, Cedar Walton in the second. There was a nice balance of blues, ballads, up tempo and between in both sets. Steve’s explanations of the history of the tunes was very interesting.

We started off with one of the many blues tunes of the evening. “Ready Rudy”. It was written as a tribute to a hero of mine, the amazing sound engineer Rudy Van Gelder, who worked with just about everybody at Blue Note Records and others. That set up the audience for a great evening of straight ahead jazz, all of its period, superbly played. Both Steve and Dave had excellent solos in that one, and in many others through the evening.

Steve modified his bright clear tone for the ballads. For “You Know I Care” and “Rainy Night” , he made the tone darker. “Empathy” was played with the Harmon mute, which can sound squeaky in the wrong hands. Not with Steve.

Matt was superb throughout. He had very big ears, making it easy for me on the desk to balance the band. Solos and trading 4’s were all spot on. The solo in “Los Malos Hombres” was particularly good.

Dave gave us powerful work throughout. His solo in “Ugetsu” (“Fantasy in D”) was special. That tune, I think, was may favourite of the evening, with its almost fugal head and outro. Everyone had super solos in that tune. “One Flight Down” had him triple timing.

Dario had fine solo in that one. It was his Fleece Jazz debut and I hope very much that we see him again.

The solo I remember most from Rob was on “Los Malos Hombres”. That tune also showed his accompaniment skill, of a very high order, under the beautiful horn chorus. He is returning to us in the summer with his own band.

Next week, we are again in familiar territory with the music of Philly Jo Jones. The world class drummer, Luca Santaniello leads this superb quartet, with Steve Fishwick returning to us on trumpet, Gabriel Latchin on piano and Calum Gourley on bass. Come along and hear some great straight ahead jazz.