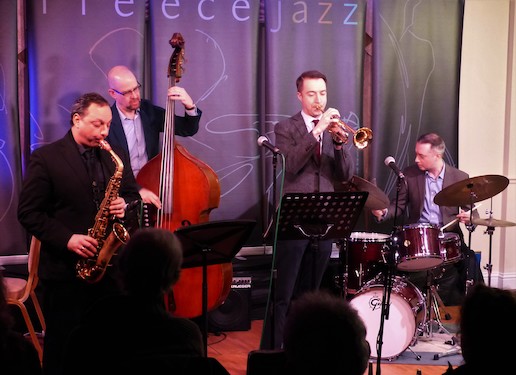 On Friday we had four top guys without a chordal instrument, so I expected an interesting sound from trumpet, sax, bass and drums. More than interesting: it was a very fine gig.

Steve Fishwick (t) led the group in partership with Alex Garnett (s), with the New Yorker Mike Karn (b), and twin brother Matt Fishwick (d). These gentlemen are steeped in the bebop tradition, and it was mostly a bebop evening, with tunes by Steve and Alex, Monk and Johnny Green. I think the arrangements were shared between Steve and Alex, and they were terrific, and not easy.

Steve takes his music visually very seriously (but watch the expressive eyebrows). On Friday he was visibly having a fun time up there. His command of the instrument, particularly in the high registers, is about perfect. His solo on his tune, “The Creep”, particularly caught my ear. He used a cup mute, which is an old design, and sounds a bit like a Harmon mute, but a bit sweeter. He played the flugel on two tunes. On Alex’s “Rio de Ron” the flugel in unison and harmony with the sax gave a delightful change of timbre.

“Rio de Ron” translates as “River of Rum”. Alex was the compere for the gig, and we got quite a history of his favourite Demerara rum. In addition, he gave us a lot of information about the tunes and their background, often very funny. There was some very quick banter with the audience. Oh yes, and he played like an angel. It is difficult to pick out one solo to comment about from such a fine evening’s performance, but his solo on Steve’s “Kaftan” was a delight.

If you advertise your bassist as being a busy man in New York, you expect some special playing, and we got it. Mike Karn has all the basics, of course: perfect intonation even when double stopping, and an accurate pulse. What makes him exceptional is the idea flow. Two solos stood out for me: “Rio de Ron”, and Monk’s “Reflections”.

Matt spent five years playing very successfully in New York. “If you make it here…”. He plays the room, volume level always right. He hears his colleagues: the phrase is “he has big ears”. And when he solos, it is always great. I particularly loved his solo on Steve’s fast blues, “Wroth of Karn”. So was the trading 4s with sax and trumpet on Steve’s “Kaftan.

This excellent quartet will be followed on Friday by a monster septet playing many familiar tunes. It is led by John East, a frequent player at the 606 club in London. What a lineup! John East Hammond Organ and vocals, Mark Fletcher drums, Freddie Gavita trumpet, Nigel Price guitar, Steve Pearce bass, Dave Lewis tenor sax and Dan Newson trombone and piano. You really don’t want to miss this one.