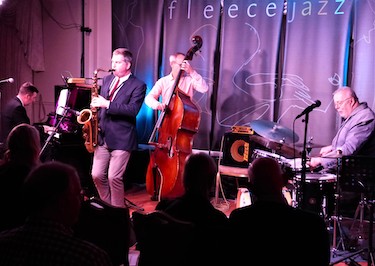 A most enjoyable band played for us on Friday. Top musicianship, great communication with the audience and among themselves, good programme and arrangements. I loved the contrasts in speed (and how!) and timbre. So thanks to:
Simon Spillett on tenor sax, Rob Barron on piano. Alec Dankworth on bass and Spike Wells on drums.

The first tune sets the evening’s tone. Tubby Hayes’ “Royal Ascot” was played at Formula 1 speed. Stunning solos by Simon and Alec on this one. It was followed by Schwartz’s “Alone Together”. Rob had a solo that thrilled us, and Spikes 4s with Simon were special.

Then the tone in two senses, timbre and style changed. I love Wolf’s “Spring Can Really Hang You Up The Most”, with the wonderful lyrics of Fran Landesman. Simon’s tone was warm and sweet for his solo on this one, such a contrast to the tough tone in Royal Ascot.

The set ended with Clark Terry’s “Opus Ocean”. We were back to F1 speeds, with a terrific solo by Spike.

And the second set got even better. The pick of the evening for me was a Miles Davis blues. Spike had wonderful 16s with Simon, and the rest had memorable solos.

A great gig. And another to follow! Nicolas Meier has been with us many times. Hi-Fi magazine says “The virtuosity is jaw-dropping and the sound is so big that you keep expecting to hear the roar of stadium applause. A real trip.”. This is a very special band: Nicolas Meier on lots of guitars, Richard Jones on violin, Kevin Glasgow on bass and Demi Garcia on percussion.