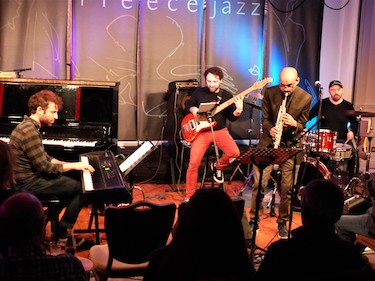 Intensity is the word that comes to mind from Friday’s glorious gig. Our players were led by Sean Khan, on alto and soprano saxes, with Sam Leake on piano and keys, Lorenzo Bassignani on electric bass and Laurie Lowe on drums. Did the audience like them? They demanded two encores.

Some players don’t let their bodies reflect the music they are playing. Sean’s body is hugely expressive, as the notes fly by or sustain. He gave as a programme of his own writing and standards, nicely balanced between slow and fast, tough and gentle.

The first number, his “Said” was a great introduction to his work. It had a strong middle eastern vibe. Sean’s solo was very powerful, with huge fast strings of notes across the entire instrument. It was very special to hear and see. It was followed by another original, “Waltz for Hermeto” which showed us his intensity on a slower piece. His use of dynamics was striking. What was particularly special was his accompaniment when the others soloed. What a debut at the club! He will be back.

Sam Leake has played for us before, so we know his work to be excellent. He played piano and keyboard. I enjoyed his work all through the gig. If there was a highlight, It was the last tune in the first set, Monk’s “Blue Monk”. Sam is also capable of speed, but on this one, his playing was very Monk like (or maybe Stan Tracey like), sparse in places. A real joy.

Lorenzo Bassignani was new to us. He is a master of his instrument of course, whether soloing, or providing the pulse and foundation for the others. I loved his solo on Victor Young’s “Stella by Starlight”. As an accompanist he was superb. I noticed this most in Shorters “Yes or No”, very fast.

It was with John Law in 2016 that Laurie Lowe was last with us. On Friday, he reminded us of his talent. He had a few long solos, the best was probably in the second set, Hermeto Pascoal’s “Mixing Pot”. He played a larger kit with two toms, and got a big range of timbre from it with both sticks and brushes.

Next week, a Fleece Jazz favourite, Fletch’s Brew returns, but with some differences in the lineup. Mark Fletcher leads from the drum kit with Jim Hunt tenor sax, Jim Watson piano and keyboards and Laurence Cottle bass. Across evolving line ups the central ethos of the “Brew” remains commitment to spontaneity, whether playing original compositions or new arrangements across the jazz styles. And there is another commitment: a great deal of fun and joy. Don’t miss it.