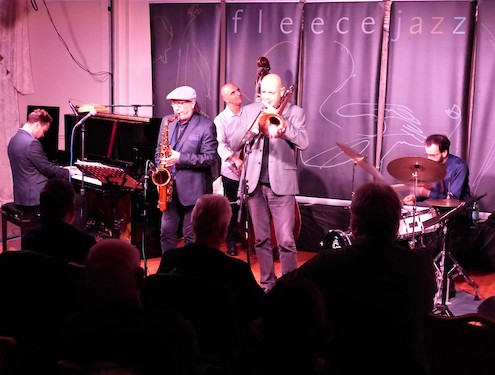 David Lyons is on holiday so he has asked me to do the review. Normal service will be resumed next time around!

The evening was an homage to the work of Cedar Walton, the pianist, composer and arranger. Born in Dallas, USA in 1934 he produced some lingering melodies and jazz classics which were performed superbly by Renato D’Aiello and his companions.

The first set opened with the Hungarian pianist, Mátyás Gayer backed by Nicola Muresu on double bass and Alfonso Vitale on drums. All three had short solo parts which helped establish the format of the evening. Next up was Cedar’s Blues which highlighted the elegant playing of Renato and Roberto Rossi.

Homage to Cedar was written by Mátyás and he led the band before the relaxed and dapper Renato played a beautiful tenor solo. To my mind this had a slight calypso feel to it and as the evening unfolded this variation of style and mood was clearly evident. The Maestro was a slower song and the following ballad, You’ve Changed allowed us to experience the smooth and mellow style of Roberto in his solo. The final number in the first set was Firm Roots. An up-tempo Walton number which was delivered with pace and energy by all concerned.

The gentle harmonies of Martha’s Prize opened the second set. Roberto Rossi on trombone took lead before handing off to Renato d’Aiello. Both added their instrumental character to this lovely and clear sounding piece. The tempo increases for the next number which has Renato and Roberto taking a double lead before each performs superbly in their solo leads.

Portrait of Jennie was, for me at least, the stand out number of the evening despite not being penned by Walton. Renato played this ballad with a slow and perfect delivery. Superb timing and compassionate playing. The final number is loosely interpreted as “Red Eyes”. At thirteen minutes this was the longest number of the evening and allowed all to highlight their individual skills. Renato and Roberto led in a double act before handing off to each other 17 times for their individual input. They came together for the all-in finale. A fitting end to the night……but of course, being Fleece Jazz, it wasn’t. The encore was a piece called No More. It, and the rest of the evening left the audience wishing for LOTS MORE!

No gig next week, but the delightful Catherine Lima brings her band on 11 October: Catherine on vocals, Paul Higgs on piano, Alex Field guitar, Alex Keen bass and Jason Cambell drums. This gig will be a delight. See you there,