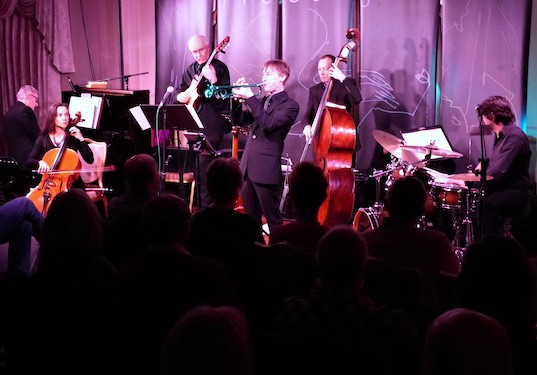 Talk to non- trumpet-playing musicians about Paul Higgs, and they say he is the best, as well as a very clever arranger. They should add that he has great contact with the audience, and he and his band have great fun, so we do too. He presented a lovely programme with a band that sometimes sounded much bigger than it was, and sometimes small and delicate. This was an evening of gentle (with one exception) but complex arrangements, all by Paul, and some of his own tunes.

The band was Paul Higgs on trumpet, Andy Watson on guitar, Chris Ingham on piano, Jerome Davies on bass, Natalie Rozario on cello and George Double on drums.

Let’s deal with the exception first. Paul’s work had been swinging, accurate, lovely tone, but not virtuosic all evening till this point. He told the story about the BBC continuity announcer who had trouble saying Rimsky Korsakov’s name, so he practiced hard, and then, live said, “And now, Rimsky Korsakov’s Bum of the Flightlebee”. So guess what came next?

Talk about virtuosity from all of them! Paul’s fingers pushing valves faster than one could see. Natalie’s super fast work, making the cello sound like a swarm of angry bees as well as high speed accompaniment; the others all accurate, of course, and grinning at each other’s work.

The first number of the gig was Paul’s “Pavane”, a lovely gentle dance. Somehow the cello made the quintet sound like a small concert orchestra, all of the timbres present. It was followed by Sammy Fain’s “Secret Love”, in which Paul had an excellent solo (one of many), and George showed his imagination with the brushes.

I wish I could read my writing on the sixth number, “Baren something”, because Natalie had a superb extended intro and solo on that one.

Gerry ran the second set, and I sat down, unfortunately in the dark. I wrote something for each tune, but can read about 10% of it. So I know that Chris, Jerome and Andy had fine solos, but cannot tell you on which numbers. A pity, because the whole gig was a wonderful experience. This was a band with a special sound, musicians of the top drawer enjoying each other’s work, fine arrangements, and lots of fun. Find the CD on Paul’s website, do.

Next week, the stage gets bigger to accommodate the Tom Green Septet. Press comments:
“Some of the most exciting original music I’ve heard for a long time” Dame Cleo Laine.
“A kaleidoscope of harmony that is not only phenomenally skilful, but absorbing and endlessly entertaining, too” – Dave Gelly, **** .
We will have Tom Green trombone, James Davidson trumpet/flugel, Tom Smith alto sax, Sam Miles tenor sax, Sam James piano. Matthew Read bass, and Dave Hamblett drums.
Do join us.