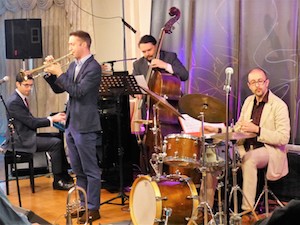 We are getting a lot of straight ahead bebop lately at Fleece Jazz, and last Friday’s gig was an exemplar. Luca Santaniello brought us music played and loved by the great drummer Philly Joe Jones. It was played superbly by this band, and loved by the audience.

Luca is a New York based Italian drummer. We had Steve Fishwick returning to us on trumpet. Gabriel Latchin graced our piano, and Calum Gourlay was the pulse on bass.

The evening started gently with Van Heusen’s “It Could Happen To You”, Steve on Harmon muted trumpet. Steve is a fine instrumentalist, but on Friday he was really on form. With the exception of eyebrows, Steve doesn’t show a lot on stage, but the heart and soul (the song came later) were strong in the music. Gabriel and Calum had excellent solos, and Luca showed his skill in 4s and 2s with Steve.

I didn’t hear the name of the next number (mia culpa). It was an up tempo number with an interesting structure, As well as head/solo/head there were “shouts” leading into a massive solo by Luca. Gerry and I got a taste of it in rehearsal, as it was new to most of the band, and it was wonderful to hear it come together in performance, fun to watch in rehearsal.

That was the pattern of the gig: a good mixture of tempi and genres, all music associated with Philly Joe, and often Freddie Hubbard, with whom he played often. The first set ended with a Brazilian flavoured “Speak Low” (Kurt Weill), fast and furious stunning solos by Gabriel, Calum and a wowser by Luca.

Steve played flugelhorn (my favourite instrument) on two numbers. Green’s “Body and Soul” had the Hubbard, rather than the Coltrane harmonies. Steve injected a light vibrato in a beautiful solo. In Haggart’s “What’s New”, the flugel delighted us again. Calum had a superb solo on this one. His instrument is new, but he plays with gut strings, and the bass sound is woody and lovely.

From Hank Mobley’s “Reaching Out” album, we had “Looking East”. There was an interplay between Gabriel and Luca that I will remember. You can see and feel Gabriel’s listening, reacting, and from time to time, proacting.

The encore was a lovely blues, in which Luca showed us his delicate touch with the sticks. Everybody went home happy.

Next week, we have a gig I have been looking forward to for a while. I love the work, the composition, the playing and the fun of David Gordon‘s trio. David is a huge talent on the piano (and harpsichord, but not next Friday), with compositional skills to match: the trio is a joy, and often filled with humour. Oli Hayhurst returns to us on bass, and Paul Cavacuiti is the excellent drummer.

“[David Gordon is] a richly gifted player with a sparkling style and boundless imagination” – Phil Johnson, the Independent