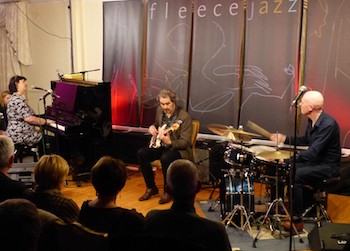 I have not been able to produce these notes for some time, because of health problems and crap network access in hospital. Last night was the first time in ages that I was able to help rig, run the sound check and the show, and help clean up.

Maybe it was the force of nature that is Liane Carroll that carried me through. What a gig! After a difficult trip from Hastings (the band all live there), we had a show that was fresh, lively, affecting, and musically stunning. Liane organized the sets in single numbers and in groups: the evening had a texture to it that made it pass almost too quickly. This was aided by Liane’s popcorn mind. Maybe its an old joke, but the first number was called “Almost Like Being In Hove”. Would Lerner and Loewe have approved? I hope so.

The two guys were terrific. Roger Carey played stunning bass throughout, with some lovely solos. Russell Field is an excellent drummer, who also had some extended solos that got the crowd whooping. But it felt like there was one mind on stage, the guys hearing Liane and she them, just about faultless through an evening of improvisation and unexpected happenings.

Liane varies her vocal range, timbre, intensity, volume (not the same) throughout her singing. She scats a lot, very inventive. What blows my mind is that she seems to do the same on the piano at the same time, almost fugal at times. One number in particular will stick with me. She did a solo, Kern’s “Ol Man River”, that everyone knows, but her take was hugely affecting.

Happy healthy holidays to you all, and
Take care,