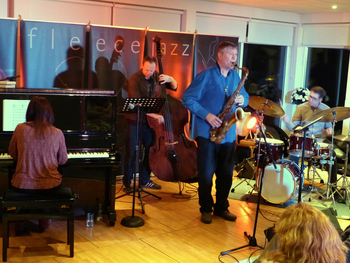 When musicians of quality arrive at the club with the intension of having fun, it is pretty well guaranteed that we will have fun too. And when the evening includes the nuance and thoughtfulness of Kate Williams and the power of Stan Sulzmann, we get a really great gig.

The band was Kate Williams on piano, Stan Sulzmann on tenor, Oli Hayhurst on bass and David Ingamells on drums.

Jazz musicians have that listening thing and care for one another: this habit was taken to its limits from the time the band arrived for the sound check through to the encore. After the hellos and hugs, they had a gentle discussion of what they should play, and how they should play each piece. The music itself was the medium for discussion as they played. It was wonderful to be a part of it.

David had not been with us since 2016. He came with the Philip Clout band and impressed us then. He plays the room beautifully, making mixing really easy. His accompanying is top drawer. He had excellent solos on the penultimate number, “Too Young To … (for heaven’s sake, Dave take better notes)” and Johnny Green’s “Out of Nowhere”, the latter all on toms. Lovely to see David back at the club.

Oli is a frequent and very welcome visitor. His solo on Jobim’s “Portrait in Black and White” was full of Latin emotion, partially due to the use of some beautiful extended double stopping. The same technique made his solo in Gershwin’s ” My Man’s Gone Now” very special.

Stan is a true powerhouse who is capable of great subtlety as well. His intro Arthur Shwartz’s “Alone Together” was breathtaking. All his solos were great, but on Kern’s “Nobody Else But Me” he really caught the ear.

You don’t get spectacular stuff from Kate. You get power where it is needed, and a big dynamic range. But mostly, you get beautifully imagined nuance and subtlety. The range of emotions she gave us on the Jobim was memorable. Her solo on Guy Wood’s “My One and Only Love” was lovely, as was the playing of the whole band.

I don’t know why they were surprised that the audience demanded an encore, but they though a bit, and decided on “Blue Monk”, and sent us home very happy.

Next week, someone new to Fleece Jazz. A young man who loves bebop named Jon Shenoy will be playing tenor and clarinet, with Will Bartlett organ, Sam Dunn guitar and Chris Draper drums. Press comments include “A total master of all his instruments …Shenoy can hardly contain the force of his own inventiveness. – Pete Long (MD. Ronnie Scotts Big Band).
“A unique multi-instrumentalist, he plays with sophistication, heart and soul and is equally eloquent on each1 – Claire Martin OBE
Another new name rocks the Brirish Jazz scene. Don’t miss this one.