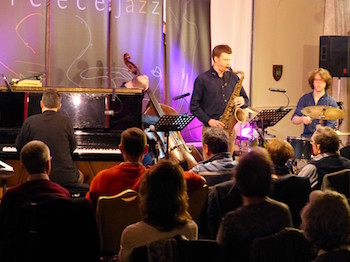 When John Law comes to Fleece Jazz, you expect something different. The opening number was the Kyrie from Rossini’s “Little Solemn Mass”. It is a piece for choir and piano. We got the piano intro, and then bass and sax took the part of the choir. The solos all felt true to the original music.

The word “stunning” gets overused, particularly by me. It was really stunning.

John Law played piano and Rhodes keyboard, Sam Crockatt played tenor and soprano saxes, Yuri Goloubev played bass, and Billy Weir played drums and glockenspiel., in an evening of recreated songs. As well as musicianship about as good as you can get, we got to guess what it was they were playing for some of the songs, not too difficult a task.

The Kyrie was followed by Monk’s “Straight No Chaser”, then Irving Berlin’s “Lets Face the Music and Dance”, then Sting’s “Field of Gold”, then Lennon/McCartney’s “Norwegian Wood”, then Theile/Weis’s “What a Wonderful World … finishing with Kate Bush’s “The Man with the Child in his Eyes”. John gave us a huge variation in mood and groove, and there was plenty of space for all four of them to blow.

Highlights? Well, the evening for a start. Yuri’s solo in the Kate Bush number was special and Billy had a fine solo on Monk’s “Well You Needn’t”. The soprano/drum duo in “Norwegian Wood” was memorable, as was Sam’s solo in Gershwin’s “Summertime”.

But it was John’s show. The arrangements were wonderful, and his accompaniment and solos were very special.

A very good evening indeed. They will be recording the second volume of “Re-Creations” in the Autumn. I can’t wait to hear the Kyrie on CD.