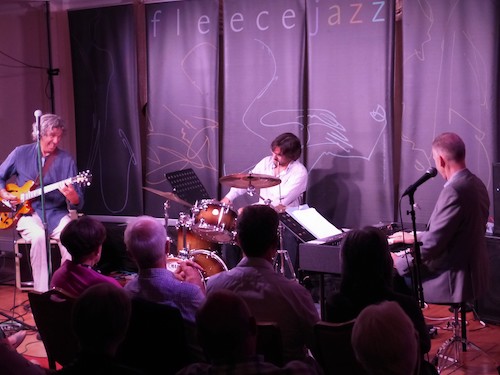 Early Saturday morning after John Etheridge‘s wonderful gig, we were off to visit darling daughter, somewhat slowed down coming and going by a power failure. Ironically, in the middle of all of the storm havoc, the fault was internal to the house. Anyway, thus the late report.

People love John. Quite a few travelled long distances to hear him. It is easy to understand. His techniques in every style of playing, the skill with looping, the flow of ideas, the invention of arrangements on the fly are part of the story. But people really like his rapport with the audience. He tells us what we need to know about the songs, and much more, often very funny. This is also improvisation.

He also uses musicians who have similar skills and a similar blues spirit embedded in their hearts and hands. Pete Whittaker is bassist, obbligato and soloist master on the organ. Drummer George Double is a superb accompanist, and his solos and 4s are filled with interest. The three are one unit, moving and bending their contribution with the ideas of their colleagues.

All the songs were great to hear and hear about. My notes show two that stood out.

John’s “The Venerable Bede” was on the dark side of blue. John and Pete both had fine solos on this one. George’s accompaniment was special. Bob Dorough’s and Ben Tucker’s “Comin’ Home Baby” was our encore: fast, loud, stunning from all three.