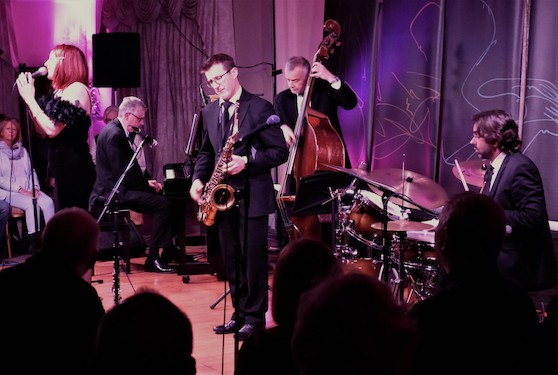 Some gigs stand in the memory.

Last Friday, we had Joanna Eden’s Jazz at the Movies. The band was Joanna Eden vocals, Chris Ingham piano, compére and backing vocals, Mark Crooks sax, Arnie Somogyi bass, George Double drums. Joanna is one of the finest singers in the UK, with a great love of the lyrics. Chris is a superb researcher, giving us the background to the songs. Mark is a wonderful tenor player, and to my mind, an even better clarinetist. Arnie does what fine bassists do, with solid and interesting accompaniment. George is a great accompanist to singers, an excellent drummer.

Both sets started off with the instrumental quartet. We had Neal Hefti’s theme from “The Odd Couple”, and, from “The Fabulous Baker Boys”, David Grusin’s “Jack’s Theme”. I think we ought to book this quartet for a full gig.

The banter between Joanna and Chris was great fun. Chris said Joanna couldn’t sing in Portuguese, but would only vocalise. In the Mancini/Miglacci “It Had Better Be Tonight (Meglio stasera)”, Joanna’s voice soared in Portuguese in this up-tempo Latin number. To be fair, Chris had a great solo, and Mark’s solo and accompaniment to the singing were both excellent. “The Pink Panther” would have been proud.

There was a special moment in the last number before the demanded encore. From Disney’s “The Aristocats” we got “Everybody Wants to be a Cat” (Al Rinker), in which George did a terrific Krupa, with Mark climbing high as Goodman.

Bacharach has cited “Alfie” as his personal favorite of his compositions. Joanna sang gloriously and powerfully on this tune: it is so easy to make it maudlin. Joanna did not.

We had, of course, a series of Bond themes. My favourite was written by John Barry and Leslie Bricusse, called “Mr. Kiss Kiss Bang Bang” for “Thunderball”. It was perfect in mood, chords, intent, but not in name, but the producers said no good, write one called “Thunderball”..

Next week, 31 January, a BIG BAND. The Horn Factory is with us, and I haven’t room to list the 18 musicians. We will have fast moving, hard hitting, contemporary jazz from this East Anglian band.