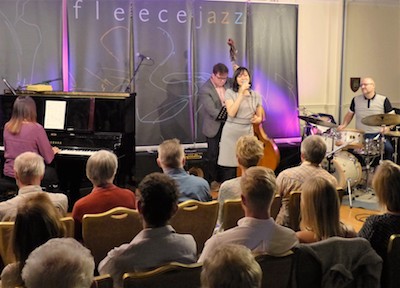 What a happy band! Georgia Mancio‘s quartet were such a joy. Georgia at the top of her form, Kate Williams‘ elegance on piano, Georgia’s brand new husband Dave Ohm stonking on drums and the young and brilliant Conor Chaplin on bass.

The music was a mix of joy and sorrow, covers and her own work. The latter included several pieces composed by Alan Broadbent, with Georgia’s lyrics. If you missed the gig (or even if you haven’t) you can get a taste of their Songbook on youtube.

There are very few singers who have superb intonation and articulation, and still communicate emotion clearly. Georgia is one of these. She can also communicate a lot of fun. She does these things in English, Italian, Portuguese, spoken word, whistle and scat. Communication is the right word: she has great rapport with the audience. Our photog, Peter, said, “Not being a singer man it has to be “very” good to maintain my full attention. Last nights gig did just that to my pleasant surprise. She got the right combination of musicians. Each excellent in their own right as expressed in their personal solos, but much more than that, they really gelled together. Surprisingly , Georgia did explain at the end of the gig that it was the first time they have all played together as a unit. It certainly was not noticed at all “.

There were so many highlights to her performance. Here are just two. The Broadbent/Mancio “Tell the River” was an art song, a lied. Just Georgia and Kate on this one. Truly beautiful. Warren’s “September in the Rain” had her scatting and whistling (again, perfect intonation).

Kate is coming to us in a month with her own quartet, including the great Stan Sulzmann. Last night, her accompaniment was somehow precise and fluid, with thoughtful and surprising solos. I love the clarity of her work, as in her solo on Jobim’s “Brigas Nunca Mais (No More Fighting)”

I hate it when people a quarter of my age show up and be brilliant. Conor seems to have perfect intonation over the whole instrument, and superb technique to go with it. His intro on Silver’s “Strolling” bounced around the low register of the instrument. Other solos were primarily at the top of the range, intricate, great ideas and speed.

Dave is always a welcome player at the club. Last night he was special. The highly political Broadbent/Mancio “Same Old Moon” gave him an opportunity for an extended solo in which the emotion was palpable. Of course, whether with sticks, brushes (or one brush and one stick), or hands, he was the foundation of the quartet. He understood the room, and played his butt off.

One nonmusical thing. Georgia, like many of her colleagues, is involved in work with refugees. To aid this, she had a successful collection after the gig. More power to her for this sometimes very scary work that she does.

We have to wait three weeks for the next gig. September 14 brings us Sarah Jane Morris and Antonio Forcione. They have each been compared to an array of musical geniuses including Janis Joplin and Tom Waits (vocally) as well as Jimi Hendrix (instrumentally); a comparison Antonio wears with pride. They also exude a wonderful chemistry when performing together. This is a special event, not to be missed.