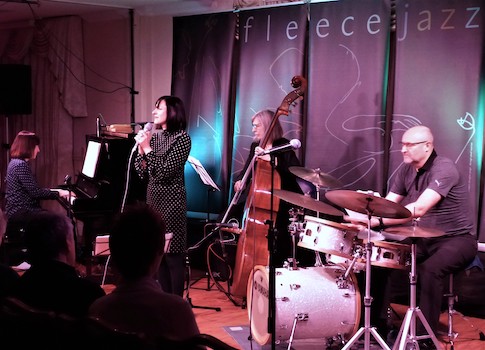 This should have been called the Georgia Mancio & Kate Williams Quartet as many of the songs were co-written by the two. But perhaps that would be unfair to the wonderful accompaniment and soloing of Julie Walkington and Dave Ohm.

Georgia was on vocals/whistle/scat/sprechen-singen, Kate on piano, Julie on bass and Dave on Drums

I keep banging on about vocalists whose production, phrasing and timbre show a love of the words. In Georgia’s case it must partially be because she is a lyricist, writing lyrics for many of the songs with Kate or Alan Broadbent. There was one by Julie, and there were some standards. Some of the material was serious. but they know each other so well that there was a lot of good humour and sheer fun.

It was a stunning gig. I could write pages about the gig, and won’t do that.

Let’s take the Styne/Comdon/Green “Just In Time” which closed the first set. They played this tune joyously in at least 3 tempi. Georgia roughened her timbre for part of this, and scatted 3 choruses. Kate had an amazing solo which moved seamlessly (no space for applause) into exciting 4s with Dave.

Or consider Jobim’s “For All Of My Life”, Kate does amazing intros. It segued into Kate and Georgia’s “Finding Home”, in which Georgia spoke the lyric. Devastating..

Some serious stuff in the second set as well. People from Refugee Action – Colchester, Phillip and Elizabeth were our guests for the evening, They brought material to read, and sold all of Roberta’s marmalade. Georgia invited Elizabeth to give a short talk on RA-C’s work. The next song was a Kate/Georgia song, “We Walk”. This slow, tough song about walking from Afganistan through deserts and mountains had beautiful strong solo from Julie.

I heard the last song in rehearsal, and laughed a lot. It was played in a whole bunch of national genres, all with appropriate languages and tempi. The ones I remember were English, Itallian, German (oompah), Portuguese, lots of others. In performance, Georgia explained that it was a resistance war cry in the languages of her heritage. It was called “Bella Ciao”, and was quite wonderful.

Thanks to a great quartet that I hope we see again soon.

Next week, 28 February, The Tim Whitehead Quartet will entertain us. Tim will be on sax, Jonathan Gee on piano, Andy Hamill on bass and Tom Hooper on drums.
“For my money, the finest tenor player in Britain today” – Andy Hamilton – Jazz Review
“‘Whitehead more than justified his growing reputation as one of Britain’s most thoughtful composers and improvisers.” – Chris Parker – The Times