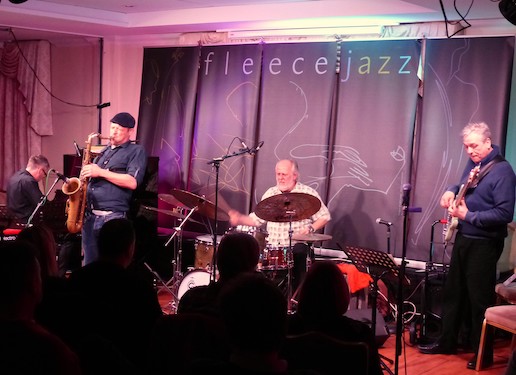 Fletch was back with a grand band of his own. Fletch’s Brew is always welcome to shake the walls. Wonderful gig.

Mark Fletcher led from the drums. The set list was invented on the fly, but displayed a pretty well balanced evening. Jim Watson was splendiferous on both piano and keyboards, sometimes both at the same time. Jim Hunt blew the roof off on tenor sax. Laurence Cottle on electric bass provided a wonderful foundation and pulse.

Jim Hunt first. He is a local boy (went to school in Stoke by Nayland). He played at the place that was the genesis of Fleece Jazz, the Peacock pub in Chelsworth. Jim is a superb tenorist. He has great control over volume and tone. In most of the tunes, he played with a tough bebop tone, an example being a monster solo in Goldings (sorry, lost the first name) “Sound Off”. In Sammy Fain’s “Secret Love” and some others, his soloing was particularly tuneful. But in Monk’s “Ask Me Now”, the tone was sweet, an old fashioned big band sound. We had a collection of brilliant solos to remember from him.

Jim Watson next. He has played for us quite a few times recently on piano, organ and keys, each time a revelation. It was piano (mostly) and keys this time. Lots of top drawer solos, inventive and varied in dynamics and mood. I listened carefully to his accompaniment, in which he found himself in the minde of the soloist. His solo in Wayne Shorter’s Black Nile stands in the memory.

Laurence Cottle is a master of his instrument, of course. The joke about bassists is that when they solo it is time to chat with your neighbour. Not with Laurence. He is so inventive. I listened to technique on his solo on “Black Nile”. He used normal single line, finger style chording in a melody string and harmonics. The thing is that they flowed by so naturally only a geek like me would take notice. He had a wowser of a solo on Avishai Cohen’s “Smashed”.

And Fletch? Well the first thing you notice is that he is coiffed and bearded. Then he slams into the first number of the night, Coltrane’s “Some of the Blues”, and yep; he is a genius. This being his own band, he had lots of soloing opportunities. The brush solo on “Secret Love” was beautiful. The extended solo on “Sound Off” was breathtaking. The thing for me, though, is his listening, Now all four of them do that. They are proper jazz musicians. Mark seems to sense what they are going to do. He is such fun to watch, and he is a good compere. Thanks for a stunning evening, Fletch.

Next week, a beautiful singer from the south coast, Sara Oschlag will be with us. She will be bringing a superb trio: Tony Kofi on saxes, Jason Henson on guitar and Simon Thorpe on bass.
Sara is a singer with a musician’s ear and a superb sense of swing.