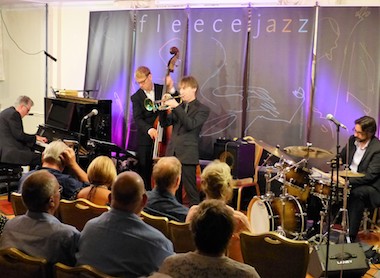 It was a superb show that Chris and his friends gave us, and show is definitely the right word. It was presented by fine musicians: Chris Ingham on piano, vocals, research, compere; Paul Higgs on trumpet, flugel, vocals; Geoff Gascoyne on bass and vocals; George Double on drums, vocals.

Chris’s thesis was that Dudley Moore was not just a great jazz pianist, but a very fine composer as well. Chris thinks that the best compositions were from the early work, mostly in the 60’s. Wikipedia gives Oscar Peterson and Errol Garner as influences, but Dudley had a strong classical background (he was an accomplished organist). When studying the music on vinyl (no written music is available), Chris was finding Debussy and Ravel chord progressions that worked perfectly as jazz.

Listening to the music was a great pleasure, sometimes intense sometimes very jolly. Everybody had great solos and accompaniment. But in a way, the star feature of the evening was Chris’s discussion of the music, Dudley’s need for love, and other fascinating aspects of Dudley’s life and music.

The music was almost all Dudley’s. There were a few tunes that are strong in my memory on a Sunday morning. First, “Amalgam” with its intense and complex piano part and Paul’s serene flugel accompaniment. It ended with a memorable piano arpeggio which segued into Kern’s “Yesterdays”. The solos and 4’s from all four were stunning.

After the beautiful “Waltz for Susie”, with Paul using the straight mute, we had some hilarious soprano (ish) backing from Geoff, Paul and George on “Song for Susie” which had us in stitches. That was the last tune of the set, but the encore continued in a similar vein with “Goodbye”.

The up tempo “Poova Nova” (new prostitute?) also had backing vocals. Chris’s vocals on “Love Me” were intense and dark..”Sad One For George” had Paul using the Harmon mute to beautiful effect.

It was a special evening from musicians that we know well.

On the 27th of July, we have the Rob Barron Quartet. Rob has played for us as a sideman several times,: his work was loved by the audiences. He is a London based jazz pianist, arranger and composer and has been described as one of the most creative and versatile musicians of his generation.
Rob Barron ~ Piano, Nat Steele ~ Vibraphone, Jeremy Brown ~ Bass, Josh Morrison ~ Drums
Do come along.