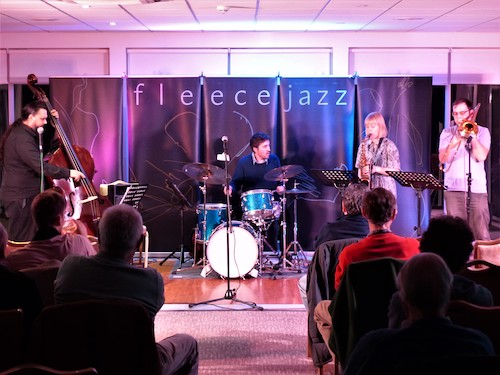 Calum Gourlay !!  . Well, this guy can certainly make the Big Double Bass sing. A deep rounded sound giving us some quite extraordinary solos to a very  appreciative audience . Originally playing the Cello on his musical journey. fortunately  for us changing to the Double Bass at the tender age of 14.

He leads this Quartet on a Tour promoting its debut new Album “New Ears” of which I purchased a copy and currently playing it whilst writing these simple words.As expected all tunes were played  at last nights gig, and are “All” originals , written by Calum. I always find that originals, if any good ,get even better after several hearings. All these do exactly that. THOROUGHLY RECOMMENDED !!    ” NEW EARS”

James Maddren, was the odd one out tonight . He is from England. All other three originate from Scotland
A  very gifted Drummer in  constant demand  from both younger and established Jazz Musicians / Bands  Seen and heard at Fleece many times. Great Drummer.

Dave adds:
Next week, the amazing Simon Spillett will be with us. The super saxophonist brings quite a band: Rob Barron on piano. Alec Dankworth on bass and Spike Wells drums.
“A miraculous player who sounds like a reincarnation of Tubby Hayes but with his own personality. Catch him wherever he is. Astounding!” – John Martin, The Jazz Rag