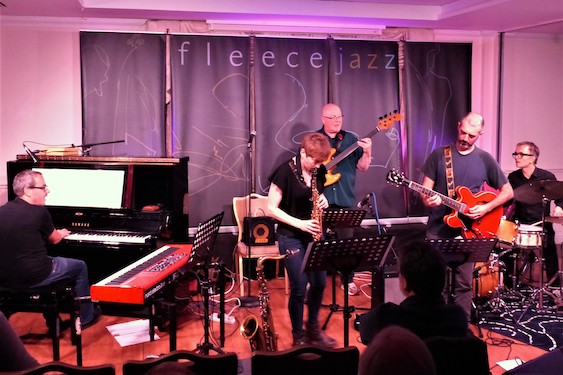 Here are some general things to say about the gig. Ray Davies (in one case with his brother) wrote music which is very amenable to jazz treatment. Ben’s arrangements were superb, and not trivial. The general level of musicianship was very very high, with great solos from everyone. The audience loved the gig.

I have to go behind the scenes to explain about some of the magic. Josephine was a late dep. She had the charts in advance. She, because of a previous commitment, arrived at 7:30, had a half-hour chat with Ben, and walked onto the stage with the band and began to play the tenor on Ray Davies’ “Victoria”. Perfectly. Now Gerry and I knew that she was cold reading, as did the musicians (including one in the audience who knew the situation). From my point of view, what she did was pure magic. Some of the musicians told me it was cold reading beyond what they had heard before.

Just to make it more interesting, Ben had written many duets for sax and guitar, some up-tempo, some balladic, some unison, some in harmony. Josephine didn’t just get the notes right. She got the phrasing right. Oh, by the way, I loved her solos (her soprano solo on “Dandy” was a good example).
,
Chris, Ben and Dylan played beautifully throughout, each with some standout solos. But there is one other bit of magic I want to tell you about.

Ray and his brother Dave wrote “Celluloid Heros”. Ben’s charts indicated an improvised piano intro, and after the head, a piano solo. Jim extended the intro and had us gasping: how do those ideas and changes of texture happen? He carried the ideas into the solo where he was chord constrained and had us gasping again. I think musically this was the highlight of the evening.

No gig next week, but on 30 August, Dave Lewis’s 1UP Band returns, with Dave Lewis tenor sax, Lizzie Dean vocals, Al Cherry guitar, Robin Aspland piano, Neville Malcolm bass, Rod Youngs drums. Dave’s arrangements and the band’s sound are steeped in the blues: Dave’s St. Louis roots come through. We would be pleased if you would join us.