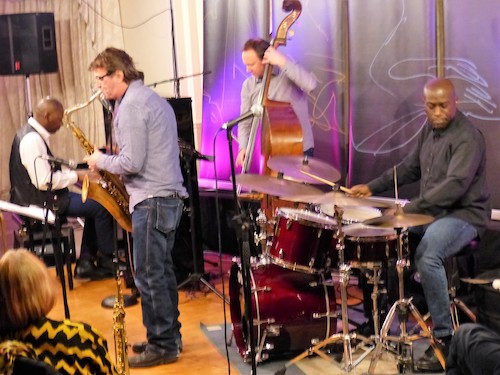 On Saturday after the gig, we went to visit my daughter to celebrate her birthday (50th!!), and this is the first time I have had to write about the truly splendid gig. No problems with remembering.

The Basil Hodge Quartet had Basil on piano, and alll of the compositions were his. Ed Jones played tenor and soprano saxes. Oli Hayhurst was our bassistl Winston Clifford was the drummer. Dream team.

Basil writes great tunes. Some are beautiful tunes, new, but easy to listen to. Some tell a tougher story and tell it well. His piano playing is a bit Monkish (not a bad thing). His solo in one tune, “Deep Down”, raised a smile on Ed’s face as the right hand made an extended counter-melody to the tune. His careful accompaniment was just the right underpinning to the band.

Ed is a saxophonist of power and intensity. He powers through the altisimo tenor range as in “Happy New Year”, sorter and powerful in “Tears of Joy”, where he switched into double time. In the opening number, “Jobim the Boss”, Ed Basil and Oli had great solos on that one

Oli is a frequent player at Fleece Jazz. He has perfect intonation and tons of Ideas. His solo in “Regrets” was stunning: in the words of Stan Tracey, ‘The right number of notes’. Throughout the gig, he was the foundation.

We haven’t seen Winston in far too long. The guy is my favourite drummer. His brush work on the 3/4 “Regrets” and on “Common Ground” where he held a complex repeated cross rhythm pattern while still seeming to anticipate soloists with (it seems) his other two hands. Solos? Lots, and the star solo goes to the upbeat “Hanging Out”.

The second set opened with a tune I knew pretty well, “The Thirteenth Amendment”. The tune spoke about the abolition of slavery in the USA, and about unfinished business. The bass entry can be over-egged, but not by Oli. He was brilliantly simple, direct, and a little scary. Everybody absolutely blew their asses off, the audience clapped and hollered afterwards, and one of the musicians said loud enough to hear, ‘follow that’.