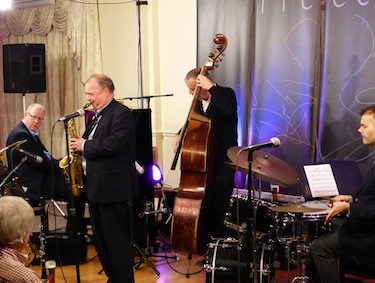 Alan’s dry wit and humour permeated this grand gig. Four of the best just got up there and played, hardly any charts. Five elements made up this grand evening: Alan Barnes on baritone and alto sax and clarinet, Robin Aspland on piano, Arnie Somogyi on bass, Matt Home on drums and an audience that loves the music and loves the musicians. Sad there were not more of the latter to enjoy it.

I am not sure whether there was a partial set list or Alan made up the list as he went along (which was part of the fun). These guys know each other and the music so well that all the ensemble was tight. There was one song in which Alan had to tell Robin the 5 complex chords for the bridge: 10 seconds. Got a laugh from the audience, which was probably the intention.

The music ranged from proper bebop (Charlie Parker’s “Steeplechase”), through beautiful Jobim (A Felicidate), a Strayhorn ballad (“Lotus Blossom”) to the upbeat Walton “Bolivia”. Alan played the last two on baritone, and what was striking was his use of tone. In “Lotus Blossom” the tone was clear, sweet, beautiful. In “Bolivia” it was appropriately strong and rough.

A couple of solos to mention. Matt had a stunning brush solo in Alan’s beautiful “One for Mo”, which was written for his daughter Molly. Alan was glorious soloing in “Los Caracol”, with Matt laying down a complex groove. Arnie gave us a stunning solo in this one. And that for snails. Robin had a beautiful solo in the Jobim.

But the overall gig was a delight from beginning to end, and clearly the audience wanted more and more.