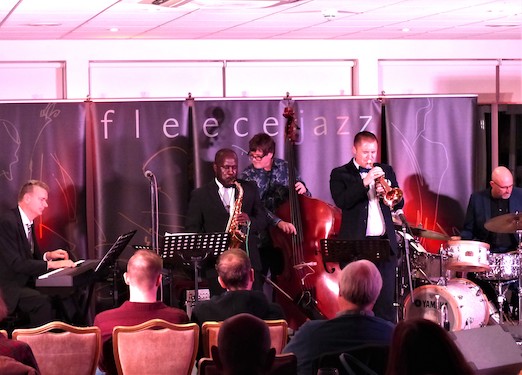 As the interval after set 1 began, an audience member said to me, “you are going to have to find a lot more superlatives for this one”. Whisperings of “best gig” occurred. Yes, it was that good, so this will be a shortened note. Details don’t matter.

The personnel for this amazing gig were Tony Kofi on alto sax, Andy Davies on trumpet and flugel, Alex Webb on keyboard, Andy Cleyndert on bass and Dave Ohm on drums.

Tony and Alex compered the gig. we got an excellent picture of the life and career of Cannonball Adderley as the show went on. The programme followed Cannonball’s career, and included work that he recorded, some that he wrote, some that was written for him, an example of the latter being Miles Davis’s “Nardis”. A couple were by brother Nat. There was a fine balance between ballads and up tempo tunes.

Everybody soloed wonderfully. Everybody accompanied with strong empathic connections to their colleagues. Everybody seemed to be having a good time. So did we.

I want to single out two people. Dave Ohm was a dep, new to the music. He played as if he had been part of the band for years. Both Tony and and Alex made a point of thanking him for his fine work. So do I.

Samuel on the desk produced beautiful sound. He worked particularly hard to make the keyboard feel like an acoustic instrument.

Part of the function of the club is to give gigs to fine young musicians. You may not have heard of the names in the Calum Gourley Quartet, but you will soon, they are special musicians. Helena Kay is on saxophone; Kieran McCloud plays trombone; James Maddren (you might know this name) is on drums; the gig is led by bassist Calumn Gourley. The music will be great. Come along.